skip to main | skip to sidebar

Rain and ruins in Siracusa

Sunday is my first full day in Siracusa (Syracuse) and starts with breakfast, taken at a large table in the lofty front room of the family apartment (bedrooms are in a kind of annexe out the back). I meet a nice Canadian couple who've been in Sicily a couple of weeks already. Breakfast is a vast spread, and includes Nutella, rolls and lovely cakes.

It's a drizzly morning so I decide to start with the archaeological museum. It has some fantastic things. To plan my visit, I pick up a leaflet only to discover it contains administrative details and theory instead of actual historical/displays information. I've learnt that this is typical in Italy: councils, museums and tourist boards are all far more keen to tell you about their own administrative structure than provide any useful background. The museum plan is uninformative and doesn't have toilets marked on it (they're not signposted either). A manned cloakroom containing bags and coats (presumably those of invisible staff) refuses to take my things as it's 'closed'. I enter the middle section of the building, and a chattering group of rather sinister-looking middle-aged men and women stare at me. I presume they're staff, and they're the only ones I see in the whole museum tour. I ignore them and deliberately look slowly at all the statues in the room.

I love the museum exhibits. After initial frustration at the administrative gaps, I realise I don't need a plan: there is only one route visitors can follow, and that takes you past every single case (although there are worrying moments when the signs aren't clear and you fear you may accidentally bypass important sections). A small girl, rounding a loop in the maze, the other side of a barrier from me, looks at me and wails 'I want to get out!' I suppose it is a long and winding path but I find it fascinating. Rows of ex-votos of Demeter and Kore remind me of the ranks of modern religious icons you see in all the religious kitsch shops (like the stalls I passed outside the amazingly busy modern teardrop-shaped church). There are some lovely statuettes of girls dancing. One is leaning backwards with her leg extended in movement, and is my favourite.

Next stop is the Greek Theatre. The rain has stopped so I pull out my notebook, sit and read/write. The weather wavered as I walked to the archaeological park (via the ruins and firmly-closed entrance to the catacombs of San Giovanni). Most rewarding experiences in this part of the world require an ordeal to be passed, and in this case it is the traversing of a near-impassable road network. My route didn't seem to be designed for pedestrians – however it did take me past some splendid and mysterious necropolis-type caves and ruins, all fenced-off and unheralded.


Here in the wonderfully-preserved stone theatre a man poses his granddaughter(?) for the interminable Italian photo shoot. A small green lizard scuttles into a hole. There's a shrieking, scrambling party of young Italians, but once they've gone it's quiet again. Not only do young Italians have to do everything in a party of at least seven (unlike English school-parties who fragment as soon as is possible) but there's always a point where they have to find some prominent point – on a ruin, say, or the other side of an arena – and shout back at the teacher and any remaining mass of fellow-pupils 'Look! Look at us! Look at me!' and then the photo saga again.

It's stopped raining and now it's actually quite warm sitting. It's not sunny precisely, but there's the kind of glare that comes through clouds and hurts your eyes (and sunburns any exposed neck, as I find later). I'm down to a jumper now, having shed a leather jacket and tracksuit top. It's almost as though spring has finally arrived. 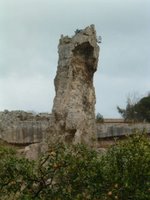 I see the caves, where doves echo around the walls. It's atmospheric in the quarries – not so nice to think about the thousands of prisoners abandoned in them though. It's all peace and lemon trees now. Best of all is the narrow spike of rock (left as they quarried around it?) which actually appears to have a ruined building on top of it – more fantasy scenery to remember.

I head back to the theatre to sit and contemplate history some more. After some contemplation, though, I become distracted by the tourists arriving, and turn my contemplation to the Italian attitude to holiday snaps. I've noticed this before (I remember a funny couple at Villa Lante, who appeared to be shooting a whole fashion album instead of a holiday snap) and here I become fascinated by the serious posing going on around me. I'm amused by an Italian couple – he's photographing her as she pouts from the stone seating, and there's the usual rigmarole of hair-tossing and showgirl-type posing. To get the photo just right though, he has to take the picture across the path, so what with their fussiness and the processions of passers-by, it's not going at all well. They're not giving up though. Once more she arranges her mane, and pouts like a model. Now they're involving someone else in taking a picture of both of them. Thank goodness they didn't ask me – I'm not sure I could handle that much pressure. As they finally move on, I notice that she's wearing a fashionable clanky belt over her tight jeans, with dangling metal links and discs. It's almost identical to some of the pre-Greek artefacts I saw in the museum earlier.

Some of the caves here, above the theatre and by the nymphaeum, remind me of the Etruscan tombs at Cerveteri – they have the same stone 'beds' in them. I'm not very clear about the order of development here. Would they have been tombs? In use at the same time as the theatre? What would the area have looked like? I re-read my guidebook and worry that I have missed the 'altar' outside the archaeological park entrance. Then I realise that I didn't miss it at all – it's not a table-sized structure, but that vast arena-scale edifice .

It's getting noisy now as an Italian tour group is enveloping me. More photo madness. A young man takes pictures of himself with his mobile phone. A family is forcing their little daughter to participate in a family shot, getting a passer by to take the photo. The girl is complaining and crying and trying to escape, but to no avail. I wonder if she's the same little girl who was upset in the museum earlier.

I move on. After the expanding crowds at the main site (glad I'm here in March: I bet most of the year is much busier), the Roman amphitheatre is very peaceful. It's very cool, too. Just abandoned, under long green grass, several types of yellow flower, purple flowers, white clover, purple-headed thistles, small, pale star-shaped blooms, a variety of grasses. Birds twittering, insects humming. My guidebook says that the basin lined in large square stones was for blood. There's no whistle-blowing attendant in sight, so speculatively I follow a small path around the outside of the arena, hoping to find away into the centre. No luck. The well-preserved entrances are barred with wooden barricades. A stick has been removed from one of them. If I was the adventurous kind, I guess I'd befriend the local youths, and come back at night to clamber in.

Part Three: Ortigia and too much Italian TV
Posted by travellingblonde at 10:21 am